I have seven budgerigars （the budgerigar is a small parrot, originated in Australia）, and four of them were found with symptom of vomiting, accompanied by mental exhaustion and emaciation. The serious situation is the birds flung the saliva and even got their heads all wet. (Finally, fluconazole worked for this symptom.) 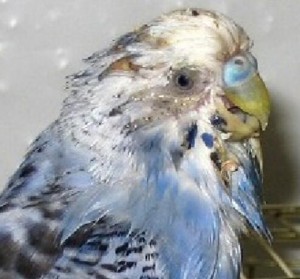 At first, I used garlic water and cephalosporin, which occasionally played a role. The birds became energetic and no longer emaciated, but soon returned to their before sicked state. After searching and reading some posts, such a symptom may be caused by Candida / Candida albicans which is a fungal infection.

I tried nystatin – an antifungal medication first, but it didn’t work at all. In theory nystatin should work to eliminate Candida / Candida albicans. But it’s because nystatin only works in gastrointestinal System, it didn’t go into the blood circulation and the Candida may have developed into the blood circulation of the birds. Then I tried fluconazole which can enter the blood circulation to eliminate the Candida. I ground one pill of fluconazole into powder and put about 1/10 of the powder into a plastic cap of cola bottle，drip feeding forcibly the 4 sicked birds. 2 times per day. It worked very quickly and 3 days later the birds have no the symptoms. Only the oldest one died one month later because its body was too weak due to the long-lasting suffering from illness and might have some complications even the original sickness has been cured. Yes, I am so sorry it’s too late when I used the right drug – fluconazole for it.